So I recently made the mistake of asking an Instagrammer to review Our Man on Earth, Book 1 of my Swithen series, and got about the review I should have expected from someone whose main concern is what the book looks like next to a scented candle and a cup of coffee. One of the things I was dinged on was that my characters speak like contemporary people instead of some approximation of how we think Dark Ages people spoke (based on the movies and TV shows we’ve seen), so in this post we’re going to discuss: The language and dialogue of fantasy.

I for one have always hated what I could describe as the “Fie on thee, foul enchanter!” school of fantasy writing. It makes me dislike fantasy and I think it’s what a lot of people dislike about fantasy, and what keeps them away. I always knew I wasn’t going to go that route, but I wasn’t sure what to do. I felt like it the way I feel about historical accuracy; my novels are NOT accurate, but there should be nothing so obviously distracting that it knocks the readers out of the story. 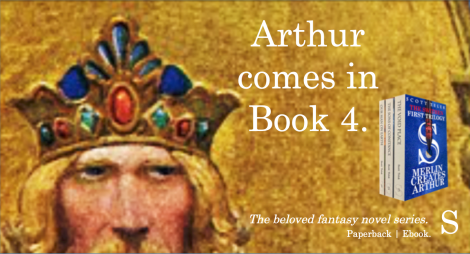 I found my way a lot through the actual writing of my books, and as I wrote, I would think to myself sometimes; “This dialogue is very casual, and they’re speaking in modern cadence… am I okay with this?” My The Swithen series aims to be a deluxe telling of the actual Arthurian legend and when I brought Book 2 out, a friend asked me about a scene in which Uther, brother to the king, is facing the reality that he will be king when his brother dies, and he goes to talk it over his best friend Ulfius. “They sound like they’re two guys having a beer after work!” he said. And I thought about it… is this what I really want to do?

Then I thought; Yes, it’s exactly what I want to do. Because what matters most to me is that readers of the present day are able to understand and relate to the thoughts and emotions of my characters. So if the king and his chief knight sound like two guys having a beer, that’s good, because I want reader to understand that’s what their relationship is like.

This may not be the case for all fantasy writers, but since my series adapts the Middle English sources that tell the legend of King Arthur—and the prose of the Middle Ages was not super-huge on complex emotions or psychological states, a big part of my adaptation is to add that in. To hopefully make us feel the emotions and the stakes that these characters faced, as a way of illuminating the story more fully. So someone creating an entirely new world might be more interested in carrying readers away into a new reality. But since my story is at least somewhat familiar to most people, what I want to do is give them a new understanding of it, and help them see these often familiar, archetypal characters as real, breathing, thinking and feeling people.

Which means, apparently, that I will be criticized by some. Others, luckily, seem to like it, and I do get appreciative reviews that express happiness at not having to slog through any “Ye olde thee and thou or kingly speechifying,” and what I found quite gratifying to hear: “You almost forget they’re Arthurian characters completely.” So that makes me feel like, at least for some, the approach is working.

How do you handle it, if you write fantasy or sci-fi? And as you read, what do you like to see? Let’s discuss it in the comments.