Book review: The Sword of Ice and Fire by John Matthews

Since I am working on Book 4 in my The Swithen series, which will be my version of the childhood of King Arthur, I wanted to see what other version of Arthur’s childhood are out there, both so I can see how other authors handled the material and also to make sure that my version is not too similar! It turns out that there is only one other novel out there—other than the most famous, T.H. White’s The Sword in the Stone—and that is John Matthews’ Sword of Ice and Fire, which is the first part of his Red Dragon Rising series.

The major Middle English sources of the Arthurian legend have nothing at all about Arthur’s childhood… Uther dies, and next thing you know, Arthur pulls the sword. Unless there’s some lesser-known text that I am missing, the idea that Merlin is with Arthur during childhood is entirely T.H. White’s creation—and shows how very influential that book was. So authors attempting to cover this period have free rein to come up with anything they can imagine, which makes it an interesting challenge. 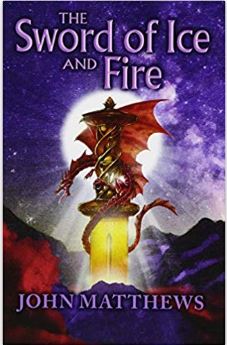 Matthews is a well-known Arthurian scholar with many nonfiction works under his belt, and his deep knowledge of the lore is quite apparent here. In this book, Arthur is being raised by Hector and Elaine (with brother Cai), but in a castle on the isle of Avalon. One neat touch is that the pathways and chambers through the castle are constantly changing. He has many questions, about where he is and who is in charge of the castle, and as he grows and gradually matures, more and more mysteries are revealed. Soon he is old enough to explore, and ends up meeting Welsh mythological figure Mabon, who becomes a big part of Arthur’s adventures in the second half, in which he finds out his parentage and legacy, has to claim one of the four Hallows of Albion, the Sword of Ice and Fire. The second half of the book is a series of rising adventures in which Arthur has to find his courage to discover, and defeat, a hidden enemy.

The book is Young Adult and is very much steeped in the florid language we associate with fantasy. Knowledgeable Arthurians will recognize several characters, such as Bercilak, the Green Knight, and the Questing Beast, each of whom has been cleverly reimagined into new roles. Sweet old hermit Blaise has definitely been reimagined in a new role! It was definitely an interesting view of how Arthur might have been raised, and clearly this novel is the work of a very learned Arthurian.

That said, it didn’t quite come to life for me. While a pleasant and quick read, I never became caught up with the characters or very involved with the plot, nor did I find the story ever gathered momentum. Also, something about to happen in the next book makes the ending of this book feel as though it cuts off just as it was getting going, which can leave one on an unsatisfied note, like the “To Be Continued” at the end of a television two-parter.

I was happy to discover that Matthews’ conception of Arthur’s childhood is almost completely different from mine, so there will be no question of similarity, although it does cast light on some different approaches to Arthurian fiction and the King Arthur myth in particular. For example, Matthews’ vision is much more mythical and fantastical, where my books aim for a more day-to-day realism and attempt to play that against the fantastic elements. Similarly, Matthews’ prose and dialogue is strictly in the elevated high fantasy vernacular, where mine tries to be more relatable to present-day readers—which some find to be too contemporary. Finally, there’s a tendency in much Arthurian fiction, Matthews’ book included, to focus on the bravery, valiance and triumphant aspects of the story, whereas in The Swithen I find I am also drawn to the failures of our heroes and their feelings of terror as they endure what they have to on their way to bravery. Luckily, there’s room enough for all of us and the enigmas of the Arthurian legend leave room enough for all of us to co-exit comfortably.

Still, an engaging imagining of an under-covered aspect of Arthur’s life, and one backed up by a great deal of knowledge and study. Ideal for younger readers who want to find a new hero, and new series to follow as its future installments are released.

2 Comments on “Book review: The Sword of Ice and Fire by John Matthews”