Upon the King: Thoughts on Loneliness in Fantasy Fiction

Wales-based writer, storyteller, narrator and druid bard Steve Gladwin contacted me early this year, enthusiastic about The Swithen books, and we quickly began a lively correspondence that led him to interview me in two parts.Steve had an interesting observation about some of my my characters, which I had not intended or considered; that my characters are often very lonely. I asked Steve if he would like to elaborate on this, and he widened the scope to consider the state of loneliness in all fantasy fiction. Read his thoughts below.

The lonely king is a figure familiar to us from our own imaginations, causing each of us to consider what it would be like to be in that position, wielding that sort of power, and also a familiar figure in fantasy literature. The concept of the monarch who seems to have everything and yet is also more alone than we could imagine is both tragic and romantic. With this in mind, I began to consider the figure of the lonely king as he appears in fantasy—and found that in the most famous cases, the emotions of the ruler are left opaque. 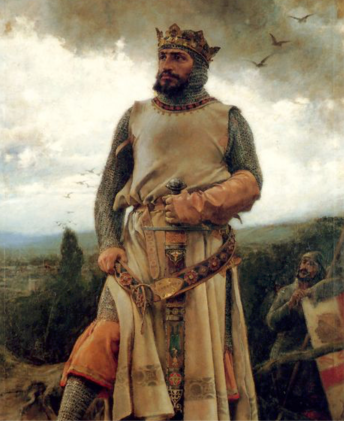 Having made his way around his war camp disguised as Harry Le Roy, and listened in to the conversations of the ordinary soldier, the ‘Upon the King’ monologue that follows in Shakespeare’s Henry V is the classic example of the world-weary monarch shorn of all the expected bravado and cold state that he has shown previously. In Shakespeare’s series of histories, we are used to hearing about the feelings of the ‘ordinary soldier’, or ‘the man in the street’, but there is a sense that the king’s feelings, save for the odd soliloquy, are far too lofty for us groundlings to understand.

Like-wise in ‘The Lord of the Rings’, we learn a great deal about the fears of the hobbits, but very little about those of anyone else. The men, dwarf, elf and wizard give away very little of their inner feeling, covering it with occasional concerned moments amidst their -at times -forced camaraderie.

Nor do the stories of King Arthur and Merlin and the knights of the Round Table written by Thomas Malory, Robert de Boron, or Chretien Le Troyes etc allow any time for inner dialogue.They express very few basic emotions (anger, jealousy, love) and lead with their actions, which we are often at a loss to understand.

Scott Telek’s series, ‘The Swithen’ has so far provided an endless supply of psychology and emotion, completely opposite to the bare bones, driven-by-action, event-and-dialogue approach. Scott not only gives us true flesh and blood characters, but ones that feel and fear, grieve, and above all, question. This is particularly the case with two characters at opposite ends of the hero/villain dynamic.

We think may we know Merlin through a multitude of written and cinematic portrayals, such as the wise or snappy old sage of T.H. White, or the wild man of the woods of Caledon, with a few bits of eccentricity in between courtesy of John Boorman’s Excaliburand all those in between.

Scott Telek, however, uniquely challenges the reader with a Merlin who may be adept at disguises, or able to move stones and tunnel ditches in order to bury and give honour to a great king. But in some strange way, he is also a child, who continually turns back to his mother for advice or approval. By choosing to never lose sight of the child, the author maintains the utter strangeness of this half-deity character, who is only too aware that there is no one else like him on earth—and thus no one who can truly understand him.

Merlin is quite literally given a ticking off by his mother at the end of book three which leads to his devising a radical form of self-punishment, which will lead him even further into loneliness.

At the other end of the scale Vortigern, (here called Vortiger) is another character we think we know as just a cruel bullying coward. But in the first part of the second book ‘The Sons of Constance;’ Telek gives us the loneliness of this particular king. In one of the most moving of all sequences in a series full of them, Vortiger, having been told by Merlin  that he will die soon at the hands of Pendragon and Uther, the avenging sons of Constance, disguises himself and takes an unofficial ‘time out’.

People may remember a later episode of ‘Star Trek – The Next Generation’, where Patrick Stewart’s Jean-Luc Picard dreams an entire lifetime while he is in a coma. It is a wonderfully poignant and fully-formed piece, and Vortiger’s ‘a life in a day’ reminded me of it. During the few hours he leaves the castle, routine and responsibilities, Vortiger – not a good man, but by no means all bad – lives the life he would clearly have loved to have led. A life full of casual acquaintances that become the closest he has to friends, of hat borrowing, and outside the castle gates a world of bustling hedgerow and running streams with nature hiding a secret at every step.

‘His lungs drew in the fresh, warm air, filled with thousands of scents, and he was filled with so many overlapping thoughts and impressions that he showed no outward reaction, he was so overcome, his mind was blank. This, the simple fact of nature, was what he had allowed himself to get lost from.’
Scott Telek – The Sons of Constance

For this appreciation of life is the gift that Merlin has, intentionally or not, given Vortiger by telling him he is soon to die. He is almost able to return to the innocence of childhood, the original tabula rasa that precedes all that he becomes.

Ultimately this may be the point, for there is only time for a glimpse into the idea of loneliness and the monarch. In these works of fantasy we see that the one thing that the ruling leader is most denied, in being an endless shuttlecock batted between duty and desire, is the chance to be unburdened and open to impression, to be ever questioning and to be equally delighted at new and old. In other words, to become a child again.

Steve Gladwin is a writer, drama practitioner, storyteller and blogger, co-creator of the mindful storytelling site Stories of Feeling and Being, as well as the author of The Seven, Fragon Tales and The Raven’s Call. His writings can also be found on the UK book review site An Awfully Big Blog Adventure.

One Comment on “Upon the King: Thoughts on Loneliness in Fantasy Fiction”